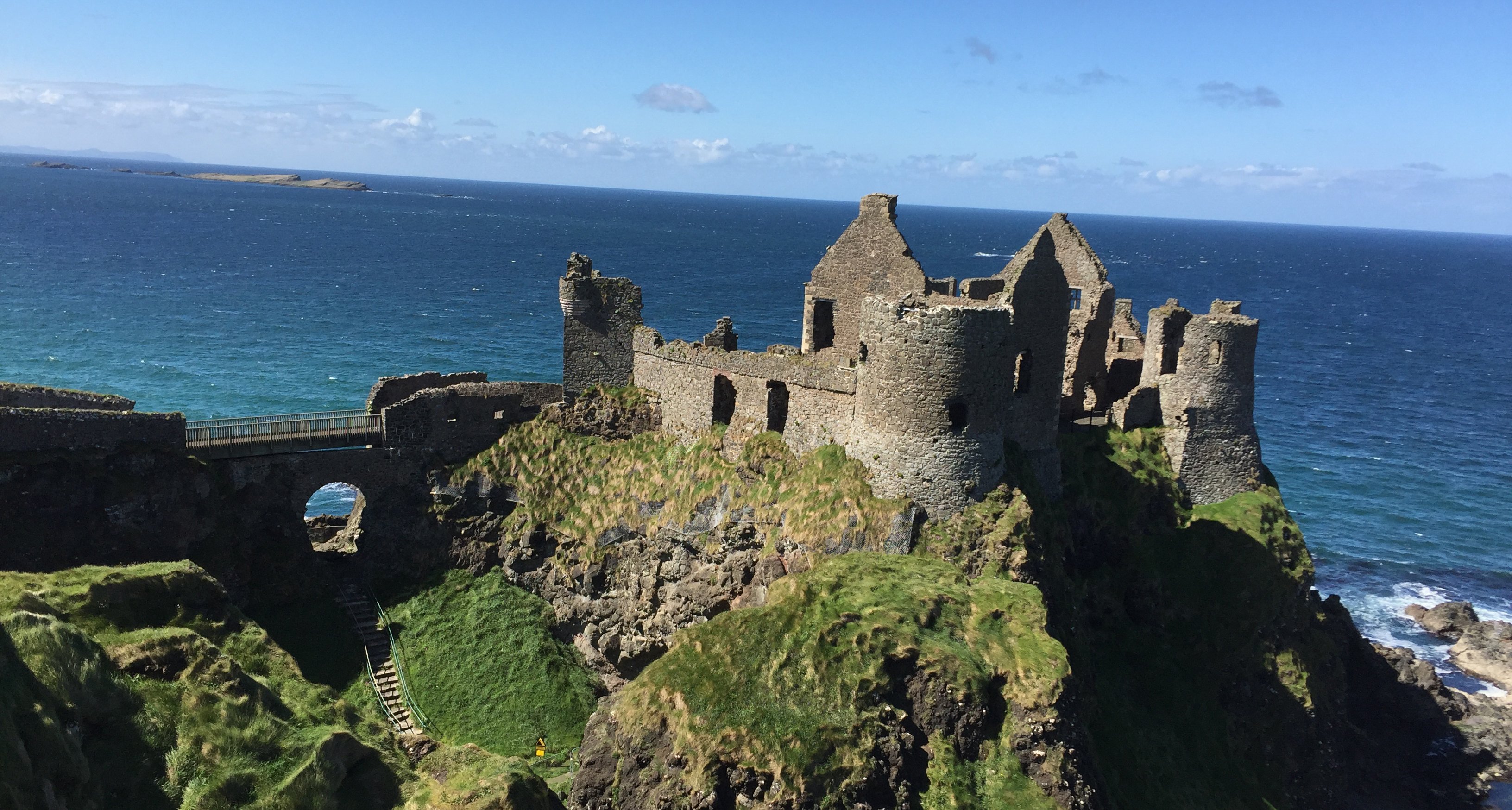 The iconic ruins of Dunluce Castle are poised on the edge of a rocky outcrop overlooking the Atlantic Ocean, not far from the Giant’s Causeway.  Through heavy computer generated imagery (CGI), Dunluce  castle became the House of Greyjoy’s Castle of Pyke in “Game of Thrones”, and is also said to be the inspiration for the great castle Cair Paravel in CS Lewis’ “The Chronicles of Narnia”. The castle certainly has a magical air.

Dunluce Castle was built in the 1200s by the second Earl of Ulster on the site of an earlier fort dating back to the Vikings. Later, the castle was occupied by a family known as the very GoT-sounding ‘Lords of the Route’. The Lords of the Route lost the castle to the MacDonnell clan, who went on to become the Earls of Antrim. Being aligned with the English royalty (hence the Earldom), Dunluce did not fare well when royalty-hating Cromwell and his troops were routing Ireland in the 1600s . The adjoining town of Dunluce was destroyed and the castle began to fall into disrepair.  The MacDonnells/Earls of Antrim ultimately left Dunluce in the 1600s and moved to their current home, Glenarm Castle in the Glens of Antrim, where the 9th Earl of Antrim has a home today.

The castle is a ruin and while 80% of visitors give the attraction a ‘Very Good’ or ‘Excellent’ score on Trip Advisor some visitors found a visit to Dunluce to be too expensive for what is there, some suggesting that you can see all you need to see from the road. We believe that if you like atmosphere and you’re into the romance of history, this is an excellent place to visit.

Access to the castle is via a recently refurbished bridge which connects it to the mainland.

The medieval castle which although in a ruined state still has the partial remains of its round towers and outer walls.

A local legend claims that part of the kitchen next to the cliff face collapsed into the sea, after which the wife of the owner refused to live in the castle any longer. According to myth, when the kitchen fell into the sea, only a kitchen boy survived, as he was sitting in the corner of the kitchen which did not collapse. This myth may not be entirely true because the kitchen is still intact next to the manor house. The oven can still be seen, as can the fireplace and entry ways into it. In the 18th century the north wall of the castle collapsed into the sea. The east, west and south walls are still standing.

In 1584 Somerled MacDonnell improved the castle in a Scottish style and installed the cannons at the castles gatehouse. The cannons were retrieved from a ship from the Spanish Armada that was wrecked on the treacherous rocks below the castle.

You may also be interested in: The Causeway Coastal Route

After more than quarter of a century spent living and working in Hong Kong, David Donnelly and his wife Katie McGregor are now living in, and loving Northern Ireland. The Northern Ireland Holidays website came from our passion to let people around the world, and even on the British mainland, know about Northern Ireland. As a country it has much to offer in natural beauty, the people are just simply amazing, and as a holiday destination it’s second to none. Even though this is now our home, we feel like tourists as we discover the region, and it is this knowledge and these experiences we want to share.
Facebook Twitter Pinterest WhatsApp
Back to top button
Close
Close