Possibly one of the world’s greatest road trips

The Causeway Coastal Route is possibly one of the word’s greatest road trips, and it can be achieved in a day. But this stunning driving route features so many interesting sites that we recommend taking your time, overnighting along the way. 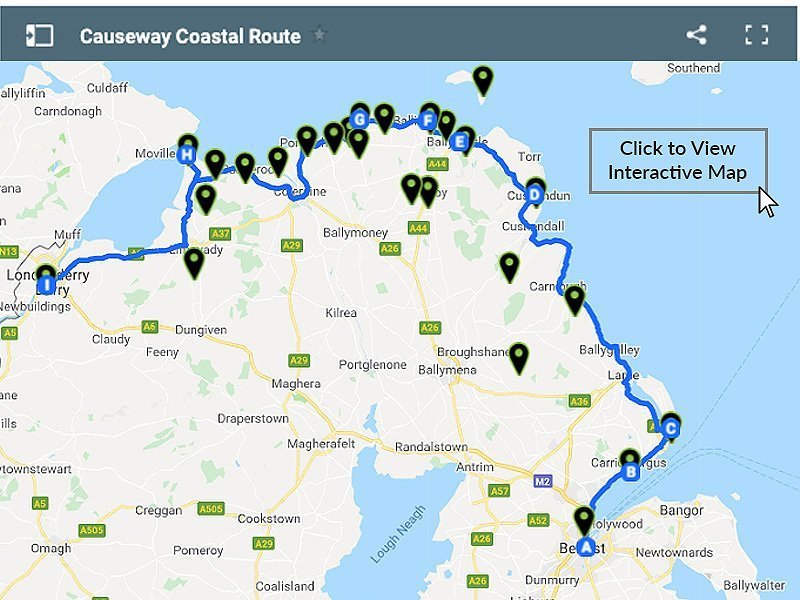 Belfast will either be your start or end point to the Causeway Coastal Route. Northern Ireland’s major city and a destination for visiting Titanic Belfast, St George’s Weekend Market, The Cathedral Quarter,  ‘Troubles’ Murals and The Peace Wall. See Visit Belfast – Top Things to Do 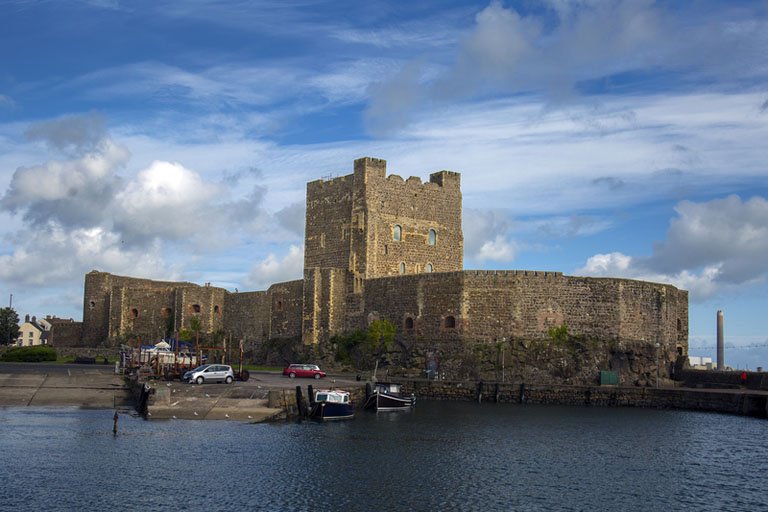 Just a short drive up Belfast Lough, this is one of the best preserved Medieval structures in Northern Ireland. With its location and fortifications, the castle served as a strategic centre at many points through Ireland’s history 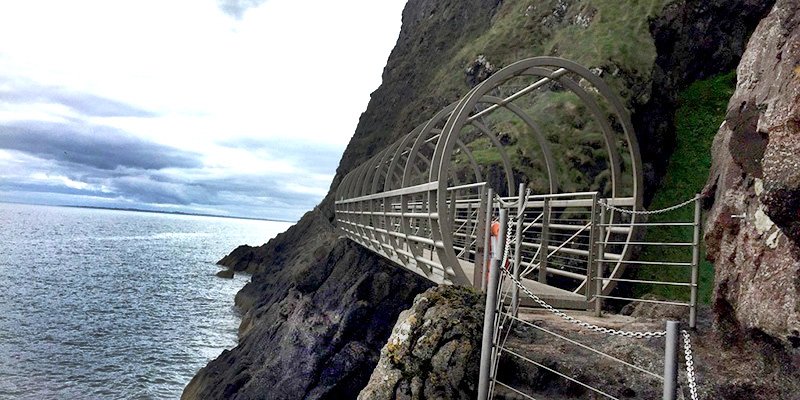 Originally opened in 1902 as a Victorian thrill, this two-hour cliff walk along a iron pathway provides plenty of fresh air, terrific views across Belfast Lough and the opportunity to get close to cliff bird life. The website describes it as the most dramatic walk in Europe, but to manage expectations, there are several far more dramatic walks in Northern Ireland alone. However, this is a noble heritage project and certainly worthwhile as a day trip out of Belfast.

The residence of the Earl of Antrim when he is in Northern Ireland, and also the venue for the Dalriada Festival in July. The ‘castle’ is not open to the public (except during the Dalriada Festival) but there is a coffee shop set in the ground which have gorgeous views of the glens towering above. 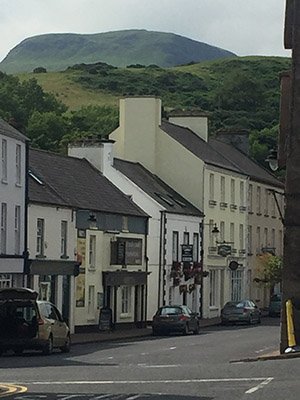 A small coastal town situated on the river Dall and popular holiday destination at the foot of three glens, with the unmissable table-topped Lurigethan Mountain as a backdrop and a lovely beach. Things to see and do in and around Cushendall include: Johnny Joe’s traditional Irish music pub (weekends) and seafood restaurant upstairs, or a visit to Glenariff Forest Park, 5 miles inland or a hike up Lurigethan.

Possibly not worth the detour, but worth noting is that Oisin, the poet son of Finn MacCool (Giant’s Causeway fame) is said to be buried in area with the grave marked by a stone age cairn.  The town is also home to the Heart of the Glens Festival set for 1-9 August 2020.

A 1185-hectare managed forest park set in the Glenariff Glen with walks for all levels, including glen walks with fabulous sea views, and a beautiful waterfall walk. You will also find camping and a popular restaurant, the Laragh Lodge. Glenariff Forest is place where it becomes easy to believe in faeries and leprechauns. 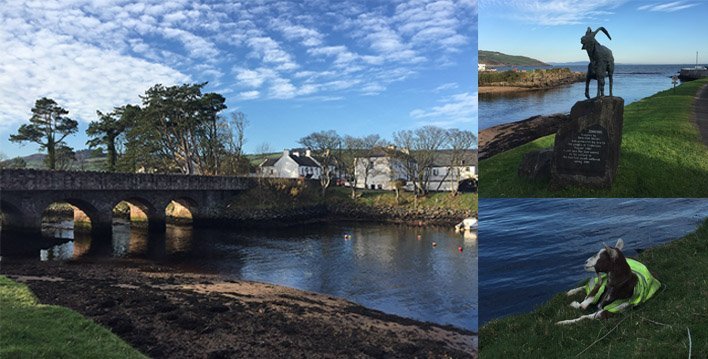 A small coastal town situated on the River Dun at the foot of Glendun that has gained some fame as the location of a set of small caves used as a location in the filming of Game of Thrones. These are a short walk from the public car park, and you get to meet the famous goat along the way! 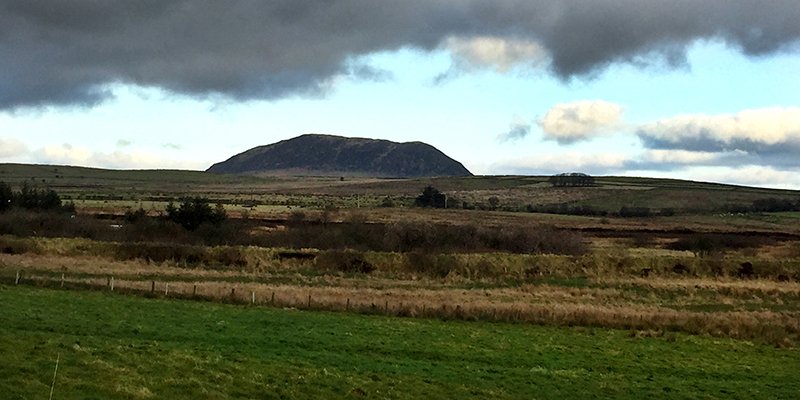 This unusually shaped mountain formed a backdrop for the Dothraki grasslands in Game of Thrones, and is said to be where St Patrick spent several years as an enslaved shepherd before he ran away, only to return again to convert the people who had previously been his captors. You can walk to the top. Read more at ‘Climbing Slemish’

A fairly large market town offering several options for accommodation with plenty of pubs and dining options. This is where you pick up the ferry for a day trip to Rathlin Island, and also a short drive away from the now famous Dark Hedges. Ballycastle also hosts 400+-year-old The Ould Lammas Fair in August every year.

An island for wild walks, a visit to the famous ‘upside down’ lighthouse to bird watch, seal watching and a good pub. This is also the island where Scottish King Robert the Bruce is said to have been inspired by the repeated efforts of a spider to spin its web, so he headed back to Scotland have another go at beating the English. He succeeded. 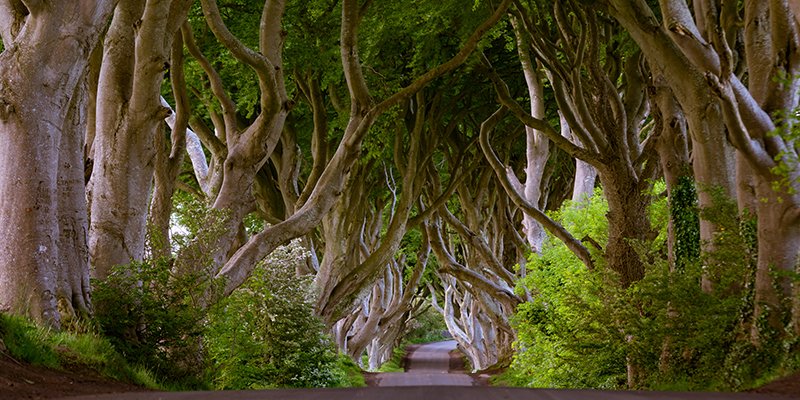 A mysterious roadway with trees intertwined overhead that caught the eye of the Game of Thrones location scout and featured in the series as ‘The King’s Road’. The road subsequently became such a popular tourist site that it is now closed to cars, which is a good thing. Read more…

Described as a hidden jewel, this ruin has a spectacular location on a small headland reached by stairs that descend the cliff from the car park. 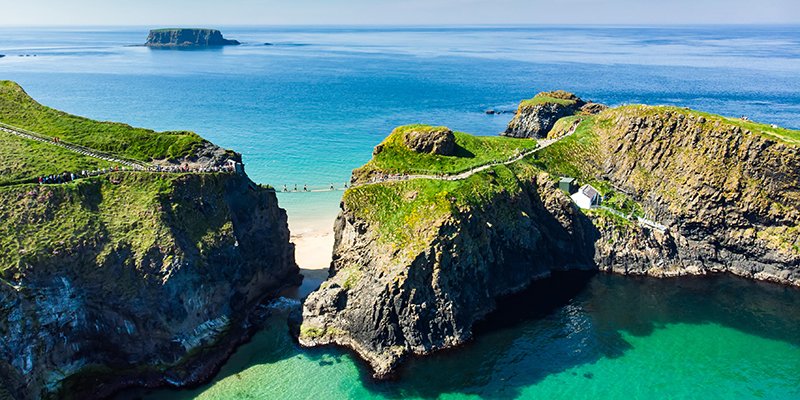 The famous 100-foot high fishermen’s rope bridge that links the island of Carrick-a-Rede Island to the mainland.  Read more at Carrick-a-Rede Rope Bridge – Challenge your fear of heights

Another ruin on a headland. This was the seat of the Kings of Dalriada (the ancient coastal kingdom that extended across to the Scottish isles); Saint Patrick is recorded as having visited Dunseverick castle in the 5th century AD. It was subsequently captured and destroyed by English Cromwellian troops in the 1650s.

A fascinating geological peculiarity set below dramatic cliffs, this is Northern Ireland’s most popular destination and certainly worth a visit. LEARN MORE: Top Tips for Visiting The Giant’s Causeway.

“We loved the wood burning stove it was so cosy. The cottages are in an excellent location for all the sight seeing you will do.”

Self-catering Ballylinny Holiday Cottages are within a short walk of Giants Causeway and offer fabulous seaviews of this stunning coast. LEARN MORE!

“Historic and well appointed hotel is charming and modern at the right places.”

“Beautiful and comfortable, this inn with huge rooms, lovely furnishings and great food was far and away the best place I stayed in a 10 day trip to Scotland and Ireland. There is also a bar with live music…”

Originally a Coaching Inn in the 1600s, this 4 star boutique Hotel is steeped in Irish history. Check out the traditional gaslit bar and inglenook turf fires. Close proximity to the Bushmills Whiskey Distillery and easy driving to all the major Causeway attractions.  LEARN MORE!

See more hotels and accommodation on the Causeway Coast >>

A small coastal town famous for being the home of Bushmills, said to be the world’s oldest whiskey distillery. If it is running, catch the Bushmills Heritage train from Bushmills to Giant’s Causeway.

Originally a small coastal fishing village, Portballintrae is a good place to park for a walk to Giant’s Causeway along and around Runkerry beach and headland. Fun fact:  The Girona, a ship in the fleet Spanish Armada was discovered off Portballintrae and recovered gold jewellery is on show in the Ulster Museum.

A much-photographed castle featuring heavily in Northern Ireland tourism marketing and an inspiration for Game of Thrones’s House of Greyjoy castle and Narnia’s Cair Paravel. The castle was previously home to the fighting Macdonnell clan, who then became the Earls of Antrim and are said to have abandoned the castle for Glenarm when it started falling in to the sea. Read more 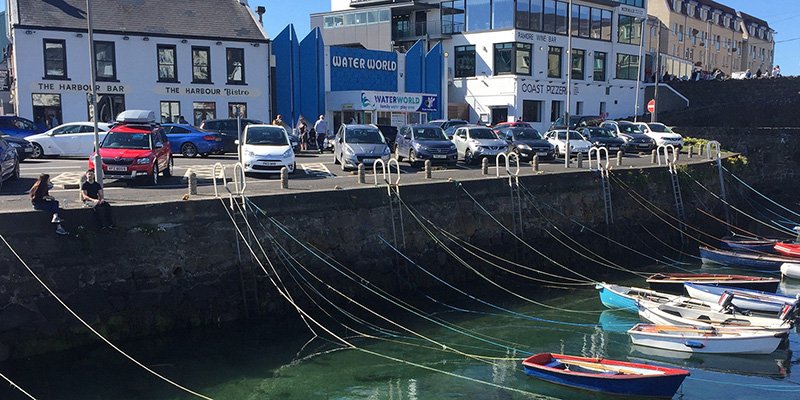 A popular seaside town featuring long beaches, surfing and SUP boarding and  home to the British Open in 2019 at Royal Portrush, and Barry’s Entertainments. Learn more about Portrush… 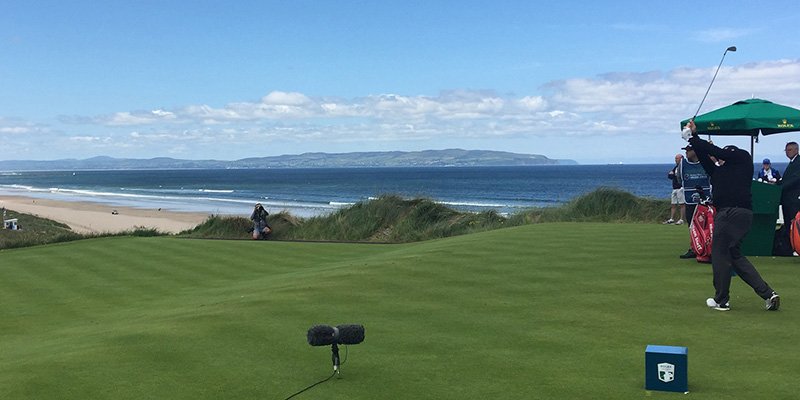 A smaller partner to Portrush, Portstewart is well known for its fabulous National Trust Portstewart Strand and Portstewart Golf Club, host to the 2017 Irish Open. Learn more about Portstewart.

Downhill is a magnificent ruin set in beautiful grounds managed by the National Trust. The iconic cliff-top Mussenden Temple is part of the estate and worth a visit as it gives you amazing views along Benone beach and the coast. The Mussenden temple is usually closed, but is opened for special days such as EHODNI (European Heritage Open Day Northern Ireland). Hezlett House, a 17th Century thatched cottage, is a neighboring attraction.

Benone Beach is another spectacular North Coast Beach where you can go crazy and drive your car the length of it! 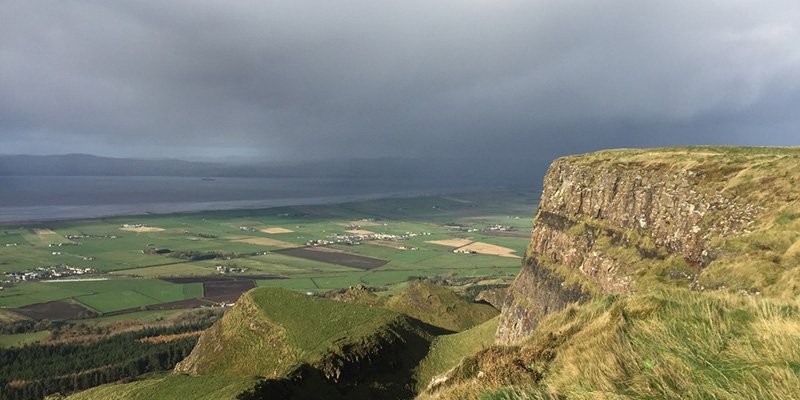 A mountain that marks the end of the Antrim plateau and is famous for its dramatic cliffs that provide a backdrop to this area. You can drive to the top for a scenic walk. Popular with hang gliders and another filming location for Game of Thrones. 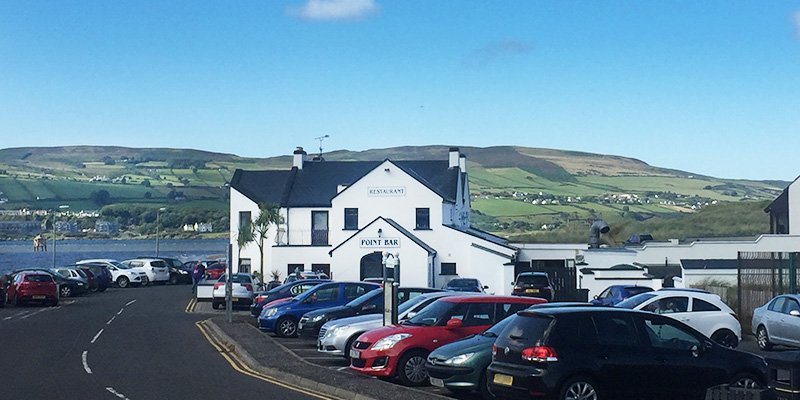 A small settlement where you can catch a car ferry across to Donegal in the summer. You’ll find a homely bar and a Martello tower, one of many built to defend the coastline. 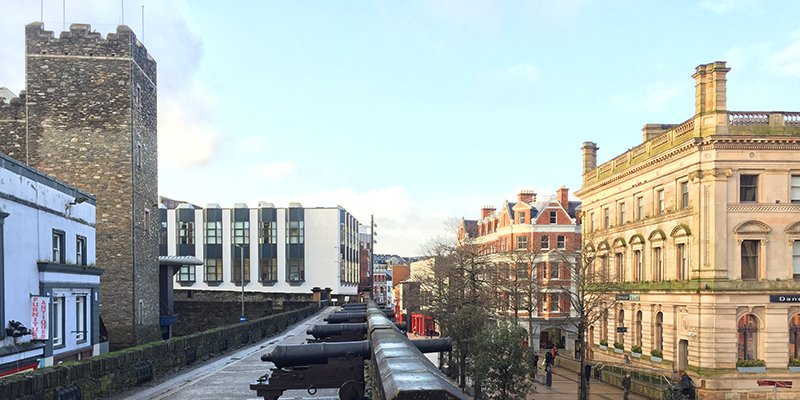 “My wife and I stayed a The Bishops Gate for a couple of nights while we toured Northern Ireland. The hotel itself is lovely and occupies a great location in Derry…”

2019 Tripadvisor Traveller’s Choice: Built in 1890 this Grade B1 listed hotel is perfectly positioned within the historic city walls in the heart of Derry Londonderry. An elegant building with a beautiful sweeping staircase – see if you can get a room with a four poster bed! LEARN MORE

From Derry~Londonderry you can head into Donegal (Republic of Ireland) and drive through this spectacular area then head back into Northern Ireland to take in the Fermanagh Lakes. Alternatively, you can head straight back to Belfast, passing over the moody Glenshane Pass and through rural Ulster before landing back in to Belfast in just under an hour and a half!

Check out hotels in the area with Booking.com