Getting there, entry fees, what to expect and a wee story about a giant

The Giant’s Causeway is probably Northern Ireland’s most famous tourist destination and it is certainly worth a visit.

Many people pop in to visit the Giant’s Causeway as part of their multi-stop Causeway Coastal Route Tour. We believe that the best way to enjoy the site is to stop a while so that you can walk around, take in the views and soak up the atmosphere.

We recommend parking away from the site and making your journey to the Giant’s Causeway part of the experience. This could include walking in along the cliffs from Portballintrae, or taking the heritage train from Bushmills. See more below. 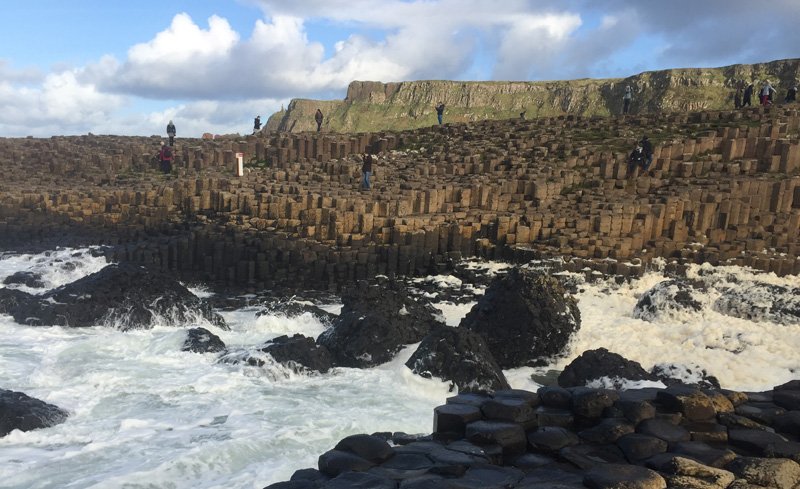 The Giant’s Causeway and Finn McCool

Finn McCool was a semi-mythical warrior who possessed all the knowledge of the world, a toolkit of magical swords and outstanding warrior powers. Through his lifetime he had many adventures which, amongst other things included rescuing kings and defeating goblins and beasts from the otherworld. Some consider him the protector of Ireland and believe that he sleeps in a cave, awaiting the day when he will awake and return to save Ireland in its darkest hour!

In this context, Finn’s battle of wits with the Scottish Giant Benandonner was just a regular day at work…

The story of Finn McCool and the Giant’s Causeway

The challenge:  The story we like goes like this: Benandonner had heard of the great Finn McCool, and decided he would challenge Finn to a battle. This he did by throwing a rock over the narrow seas at Finn. The giant’s rudeness angered Finn who accepted the challenge straight away, telling Benandonner to come right over so the two of them could fight it out.

The causeway: As is usually the case with giants, Benandonner was more bark than bite, and had given the challenge just to look good.  He was of course secretly hoping Finn would refuse. Finn’s “Hey Ho! Let’s Go!” made Benandonner extremely nervous. He started making excuses. He said he had no way of getting across the sea! This infuriated Finn who tore up rocks close by and threw them into the sea, creating a rock column causeway for the giant to use. Finn shouted to the giant to stop all his bluster and get himself over the causeway without delay.

The set up: Now Finn had eaten the Salmon of Knowledge (see the sculpture in Belfast) and knew better than to actually go hand to hand with a giant. Together with his (fourth) wife Oona, they set out to fool Benandonner. Finn wrapped himself in blankets and lay down in a baby’s cradle, while Oona began cooking potato cakes, some containing iron bars.

When Benandonner arrived, Oona welcomed him in and told him that Finn had just popped out and would be returning soon. She offered him a  ‘special’ iron cake and when the giant bit into it, he screamed out as his front teeth broke. Oona looked surprised and scolded the giant telling him that he clearly wasn’t going to come off well in a fight against Finn, who ate several of these cakes every morning without problem.

The giant baby: “Why,” she exclaimed, handing a regular cake to the ‘baby’ who chomped away on the cake, “even our baby loves them!” Benandonner is said to have taken one look at the enormous hairy baby and in an instant decided that if the baby was this big, Finn could only be enormous. This was a fight he could do without. At this, the giant got up and hurried back to Scotland, kicking the stones of the causeway into the sea so that the ‘Giant’ Finn would not be able to follow him.

We presume that Finn got out of the cradle and he and Mrs McCool spent the evening by the fire, enjoying a celebratory bottle of Bushmills!

Tips on getting the most out of your trip

Getting there is part of the experience

How much is entry to the Giant’s Causeway

There are several things you should know:

*Our site is supported by the small commission we earn from any bookings you might make on booking.com or via TripAdvisor if clicked through from our website!